Where Do Steelers and Eagles Rank as Destinations for NFL Away Games?

With millions of fans willing to travel across the country to see their favorite team, the NFL is a goliath across the world of sport. Just look at its effect on Pennsylvania sports betting.

But where do Pennsylvania’s NFL teams rank as far as destination cities for the fans of other teams looking to travel?

Comparing an array of factors, including the distance between each stadium and the nearest airport, the number of bars and hotels, and the cost of visiting each location, PennStakes.com has been able to assign each NFL team an overall index score.

Let’s see how the Pittsburgh Steelers and Philadelphia Eagles rank.

Analyzing each NFL team according to the quality of the away fan experience, the Pittsburgh Steelers rank just outside the top 10, with an index score of 53.3 out of 100. The New Orleans Saints (73.4), Cincinnati Bengals (60.0) and Tennessee Titans (58.1) occupy the top spots.

This is largely contributed to by Acrisure Stadium having an impressive Google review rating of 4.7 stars, as well as boasting 36 bars within a distance of one mile. That’s more than four times as many bars as the Philadelphia Eagles (8), and 18 times more than the New York Jets and Giants (2).

However, the Steelers are undone by the relatively expensive cost of being a visiting fan, with the price of four tickets and all the essentials coming in at almost $600. In addition, the distance between the Acrisure Stadium and the nearest airport is almost 20 miles, while the selection of hotels within one mile of the arena (22) is also poor. 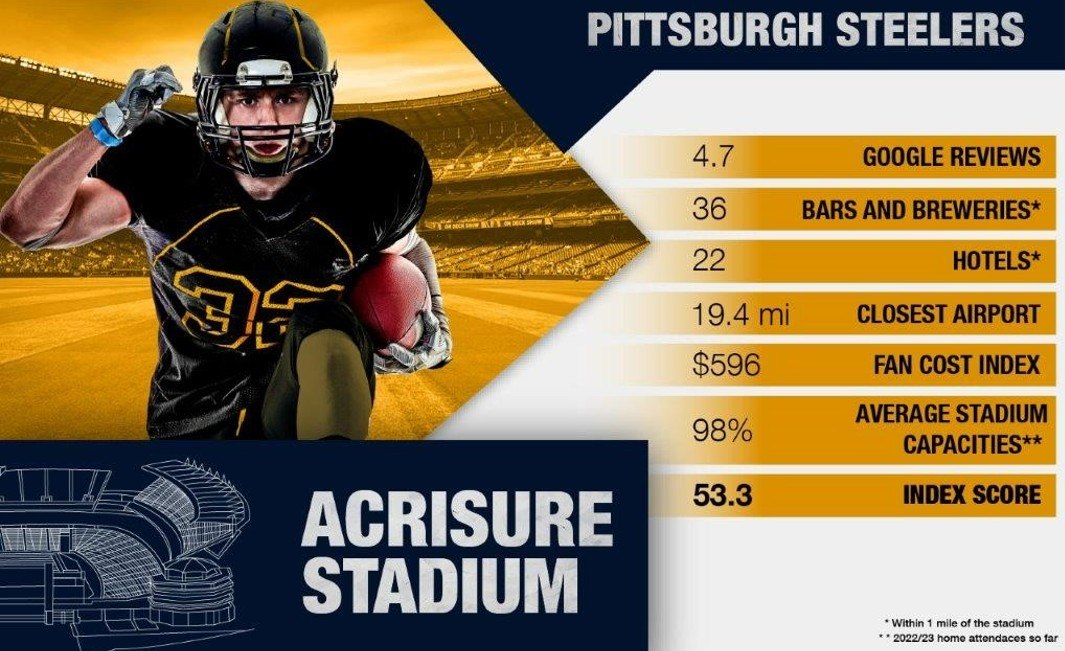 While the Pittsburgh Steelers might offer one of the best NFL away games, the same can’t be said for the Philadelphia Eagles. In fact, with an index score of just 34.7, the Eagles actually provide one of the worst, ahead of only the Washington Commanders (18.6), New York Giants (26.3), Las Vegas Raiders (27.8), Los Angeles Rams (31.2), and San Francisco 49ers (33.4).

However, one thing that does go in the Eagles’ favor is that Lincoln Financial Field is in relatively close proximity to a local airport, with away supporters expected to travel less than five miles after their flight.

First Bet Offer Up To $1,000 on the Big Game - Bonus Code: PENNBONUS
PENNBONUS
Must be 21+ to participate. T&Cs apply.

Where Are the Best and Worst NFL Destinations?

We’ve analyzed where Pennsylvania’s NFL franchises rank among the best and worst away games for visiting supporters, but which other teams sit at either end of the table?

The Best Away Games for Visiting NFL Fans

The Worst Away Games for Visiting NFL Fans

For even more expert insight like this, head on over to PennStakes.com . The site also is a great source for PA sportsbook promo codes.

To determine where Pennsylvania’s NFL teams rank when considering the best away supporter experience, we considered six different factors:

Each team was ranked for each factor and assigned a weighted index score. Index scores were then combined to give a total out of 100 and teams were ranked.

When using this data and research, please attribute by linking to this study and citing https://www.pennstakes.com/.