The Super Bowl is the pinnacle of the NFL season, bringing together the two best teams of the year in a head-to-head battle for the title of world champion. But the football’s not the only talking point of the day.

Every year, the halftime show is performed by some of the biggest names in music, drawing in millions of viewers all on its own. Super Bowl LVI’s show on Sunday was another classic, a nod to millennial audiences, with Dr. Dre, Snoop Dogg, Eminem, Mary J. Blige and Kendrick Lamar headlining the iconic performance. But what are the best Super Bowl halftime performances of all time? 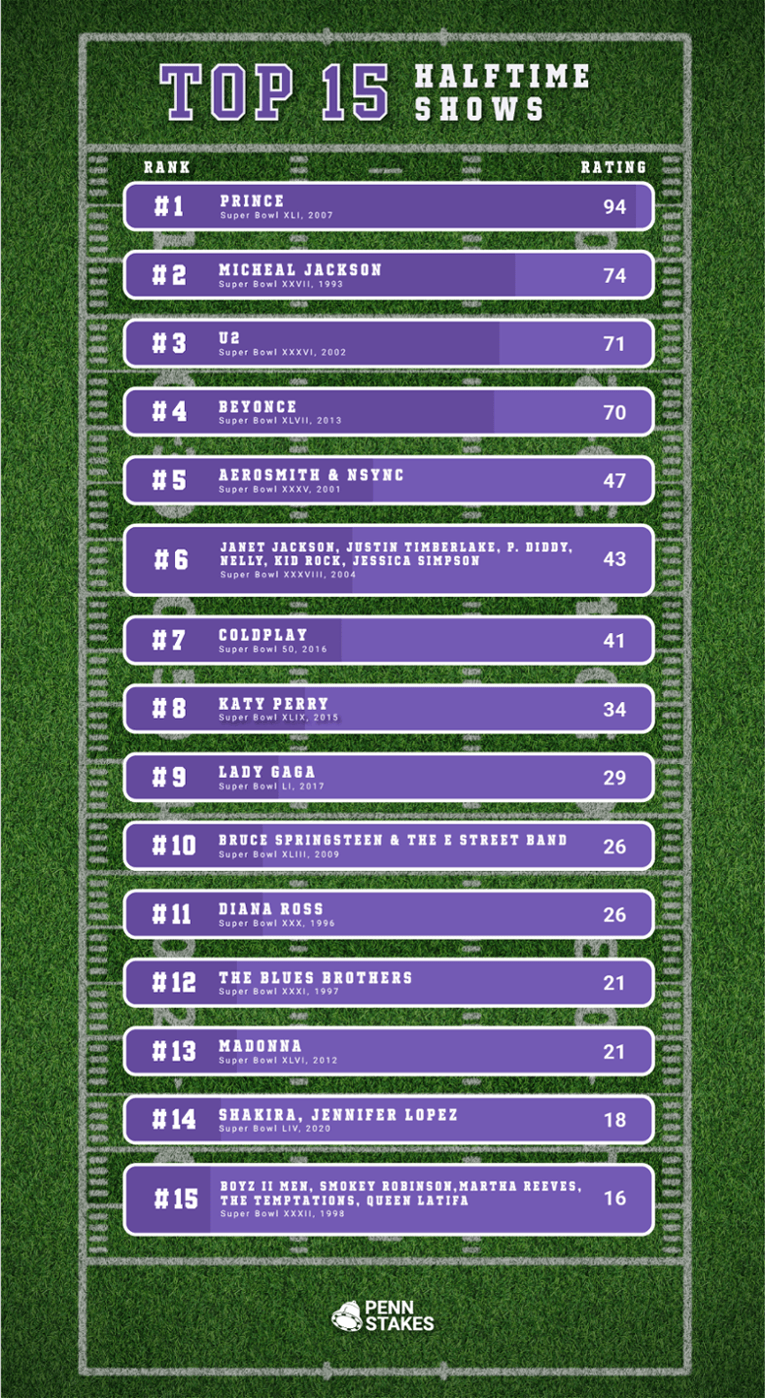 The Super Bowl halftime show has been performed by some of the most prominent names in music, including the likes of Michael Jackson, Madonna, Beyonce and Prince. But which performances are the most memorable and make the top 15 of all time?

The show received spectacular reviews across the board, with fans and critics alike considering it among the greatest halftime shows — if not the best of all time!

Among the NFL’s greatest halftime shows, we have Prince’s 2007 performance at Florida’s Hard Rock Stadium. The late musical icon put on a memorable 12-minute show, finishing up with his legendary Purple Rain during an actual downpour. A natural entertainer, Prince earned a near-perfect score of 94/100 for the production.

Any list of blockbuster performances would be incomplete without a nod to the King of Pop himself, Michael Jackson. MJ’s 1993 show at Pasadena’s Rose Bowl has been heralded as one of the most iconic halftime performances, earning a score of 74.

Claiming a spot among the top five greatest Super Bowl halftime shows, U2’s 2002 performance at the Caesars Superdome in New Orleans scores 71. Just months after 9/11, the show was a poignant tribute to those killed in the attacks.

Another megastar to make the list, Beyonce’s 2013 performance at New Orleans’ Mercedes-Benz Superdrome ranks among the five greatest Super Bowl halftime shows. Supported in part by the other members of Destiny’s Child, Beyonce’s show earned acclaim and a score of 70.

Super Bowl XXXV earns a place on our list, ranking within the 10 greatest halftime shows. Aerosmith and NSYNC performed together at Raymond James Stadium in Tampa, with special guests Britney Spears, Mary J. Blige and Nelly, scoring 47 for the production.

The game in 2016 marked half a century of the Super Bowl, so the halftime show at Santa Clara’s Levi’s Stadium had to be something special. And it didn’t disappoint; with Coldplay supported by Beyonce, Bruno Mars, Mark Ronson and Gustavo Dudamel, as well as the University of California Marching Band and the L.A. Youth Orchestra. Overall, the performance earned a rating of 41.

Katy Perry’s 2015 performance at State Farm Stadium in Arizona will go down as one of the best Super Bowl halftime shows, with a record 118.5 million viewers tuning in to watch the icon. Everything considered, the show earns a place among the top 10 with a total score of 34.

Lady Gaga stole the show with her halftime performance at Super Bowl LI, with a production that combined blockbuster brilliance and impressive technical management. It picked up a score of 29, and more people tuned into the show than the actual game.

Bruce Springsteen and the E Street Band gave a performance to remember at the 2009 Super Bowl, with their Raymond James Stadium production earning a place among the best and receiving a score of 26.

The Blues Brothers were the halftime entertainment at Super Bowl XXXI, hosted at the Louisiana Superdrome in New Orleans. Dan Aykroyd, John Goodman and Jim Belushi were joined by James Brown and ZZ Top, putting on a performance that earned a rating of 21.

Super Bowl XLVI spectators certainly got their money’s worth, entertained by the legendary Madonna at the Lucas Oil Stadium. She was joined by a host of special guests, including LMFAO, Nicki Minaj and Cee Lo Green, and put on a show rated 21.

Shakira and Jennifer Lopez co-performed at Super Bowl LIV, putting on a halftime show to remember at the Hard Rock Stadium in Miami Gardens. The show was highly acclaimed by critics and audiences alike and picks up a total score of 18.

With the Super Bowl halftime show playing host to some of the most iconic musical performances of all time, including Super Bowl LVI’s well-received ensemble, expectation from fans is always high. Ahead of the new NFL season, check out the latest sports betting offers available at PennStakes.

When using this data and research, please attribute by linking to this study and citing http://www.pennstakes.com.