The chances are we’ve all compared our own intelligence to someone else at some point, whether that be friends, family, or even strangers. But in reality, intelligence often has something to do with where you live, grew up, and enjoyed an education.

As the class of 2022 graduate from schools and colleges across the country, we’ve analyzed a series of factors to rank and determine the most intelligent states and regions in America (and those that are least intelligent). You might be surprised at some of the results! 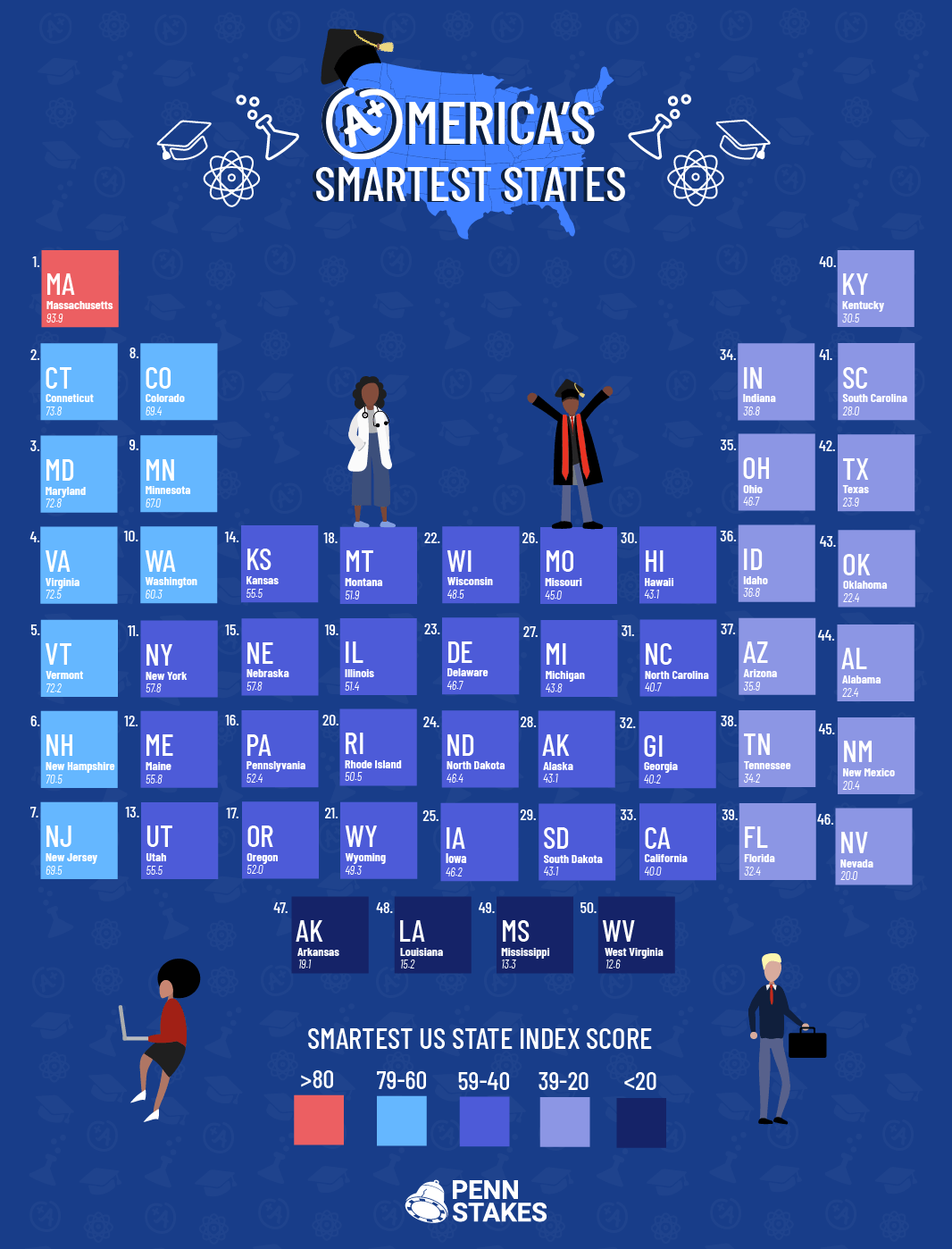 The Most Intelligent States

Ranked as the smartest state in America with an overall index score of 93.9, we have the New England region of Massachusetts, famed for its high-achieving schools and colleges including the prestigious Harvard University. 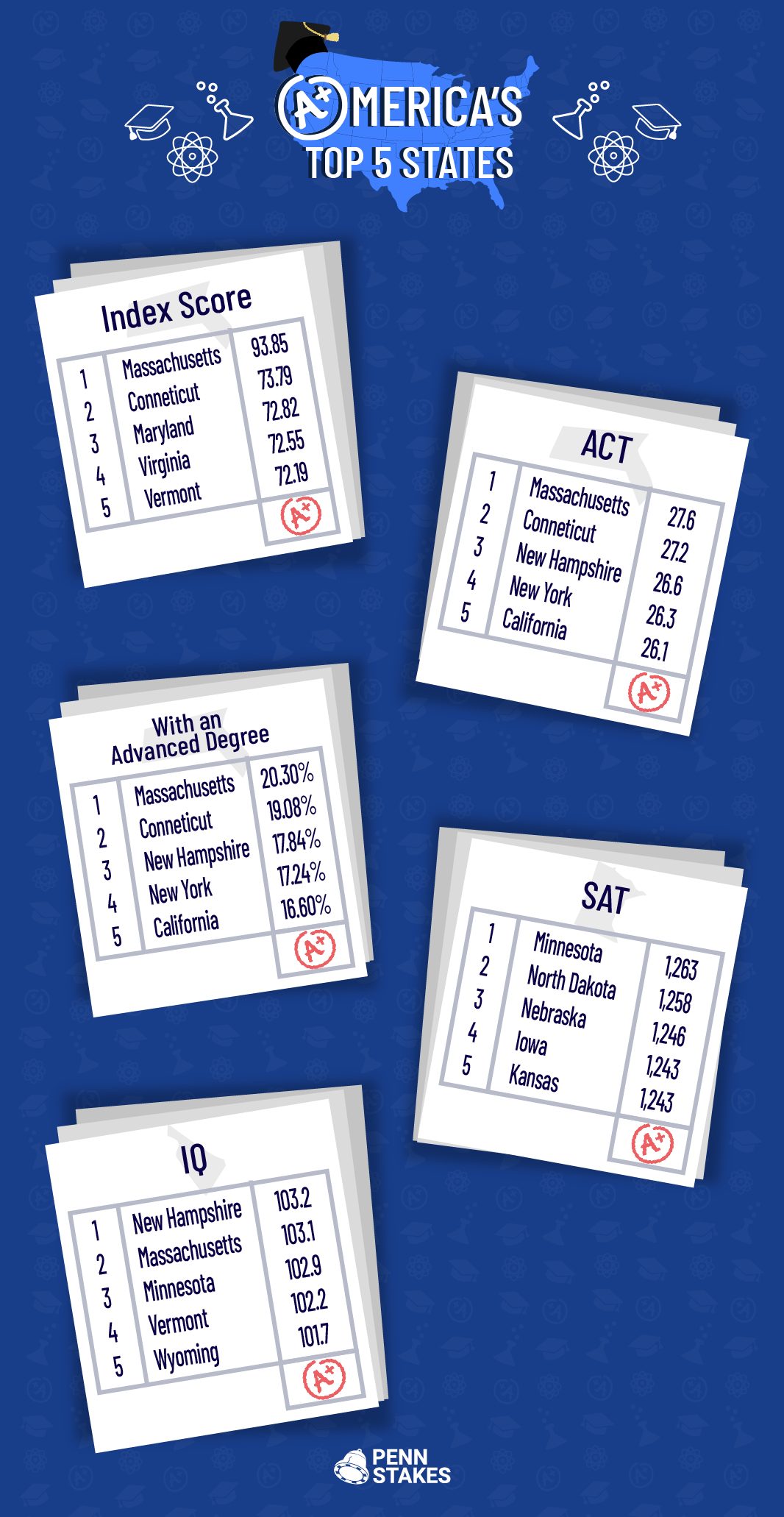 Perhaps unsurprisingly then, Massachusetts ranks first for percentage of the population with a bachelor’s degree (44.98%) and advanced degree (20.30%), as well as having the second-highest average IQ (103.1) and highest average ACT scores (27.6).

Next up, home of Yale University, Connecticut scores 73.8 overall, ranking as the second-smartest state in America. Connecticut also places among the top states for bachelor’s (39.84%) and advanced degrees (17.84%), as well as average ACT score (27.2). However, despite the academic achievement, Connecticut can only place ninth for average IQ (101.2).

In third, Maryland (72.8) is another of the most educated states in America, with over four in ten (40.88%) residents having a bachelor’s degree and one in five (19.08%) having an advanced degree. Again, though, college honors don’t always equate to overall cleverness, with Maryland only just placing among the top half of states for average IQ (100).

We’ve compared the smartest states in America, but what about the regions bringing up the rear? Or, in other words, which are America’s stupidest states? 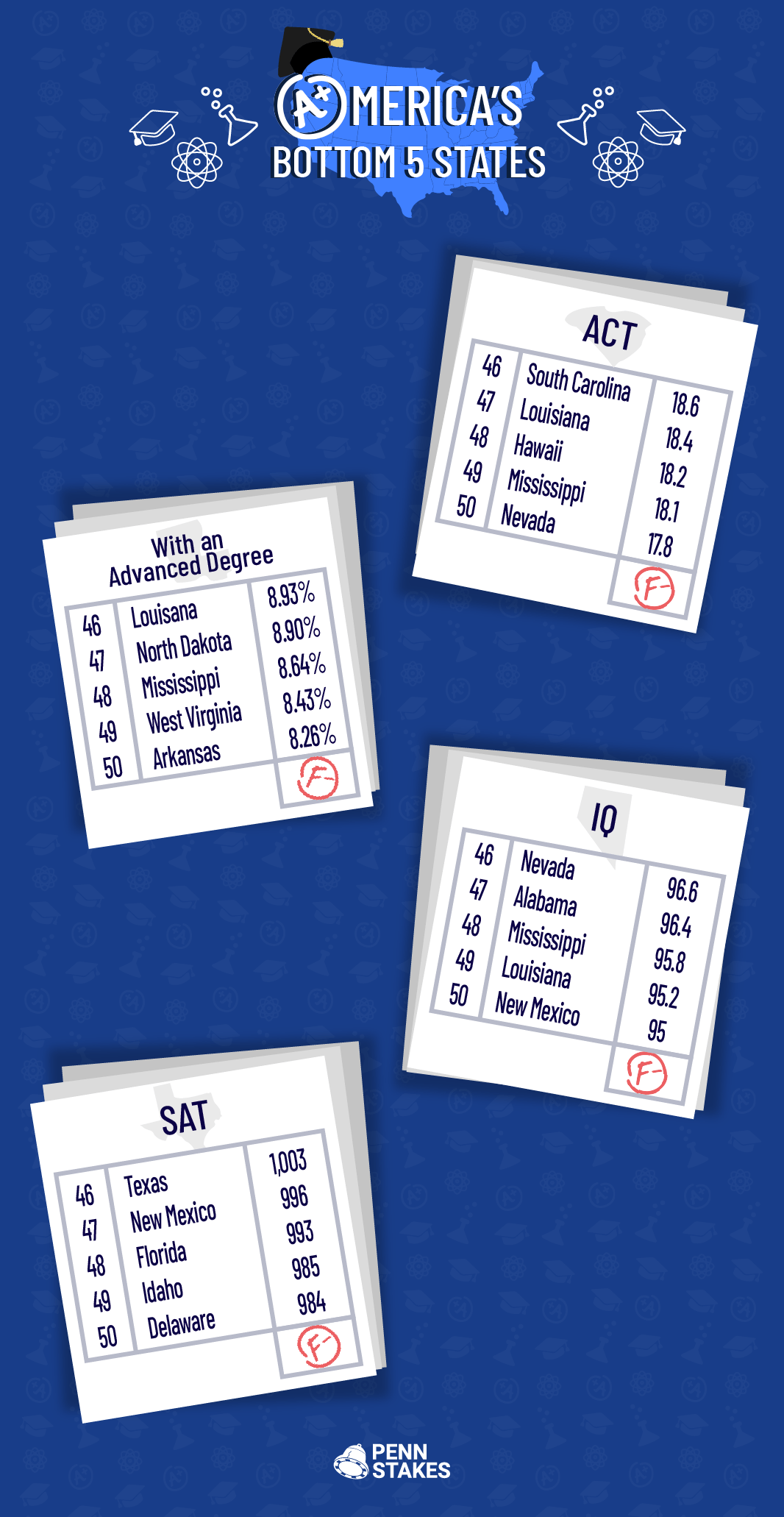 Well, ranking bottom with an overall index score of just 12.63, West Virginia claims the unwanted crown as America’s most unintelligent state. This is contributed by the region having among the lowest average IQs (97.2) and lowest rate of residents with at least a bachelor’s degree (87.14%).

Not much better off, we have Mississippi, with a lowly index score of just 13.28. Mississippi records the nation’s third-lowest average IQ by state, and places among the bottom three for rate of high school diplomas (85.3%), bachelor’s degrees (22.31%), and advanced degrees (8.64%).

Staying in the south, Louisiana also ranks among the worst states for overall intelligence, scoring just 15.20. The state has the second-lowest average IQ (95.2), and also ranks among the lowest for rate of high school diplomas (85.96%), bachelor’s degrees (24.98%), and advanced degrees (8.93%) achieved.

Rounding out the bottom five, we have Arkansas (19.07) and Nevada (19.97), both of which rank among the worst states for average IQ, with Arkansas (97.1) only slightly better than Nevada (96.6). Arkansas also has the worst rate of residents with education to an advanced degree level (8.26%), while Nevada has the lowest scoring average ACT results (17.8).

Meanwhile, New Mexico just escapes a place in the bottom five overall but does record the lowest IQ of any US state, with residents scoring an average of just 95.

As the class of 2022 enjoy their graduations, it’s interesting to recognize which states have the smartest students and highest academic standards. But only time will tell if the rankings are permanent, or if we’ll see a shift in performance next time round! For even more expert insight like this, head on over to our blog.

To determine America’s smartest states, we created an index that considered six key factors, with each factor weighted according to its importance and influence.

With a weighted score out of 30:

With a weighted score out of 20:

The combined score for both factors is out of 40.

With a weighted score out of 10:

The combined score for all three is out of 30.

Finally, we combined the weighted scores of each factor for each state to provide a final index score out of 100. The higher the score, the smarter the state.

Fair Use: When using this data and research, please attribute by linking to this study and citing PennStakes.com.

We also are here to keep you up to date on all of the latest news with Pennsylvania online casinos.