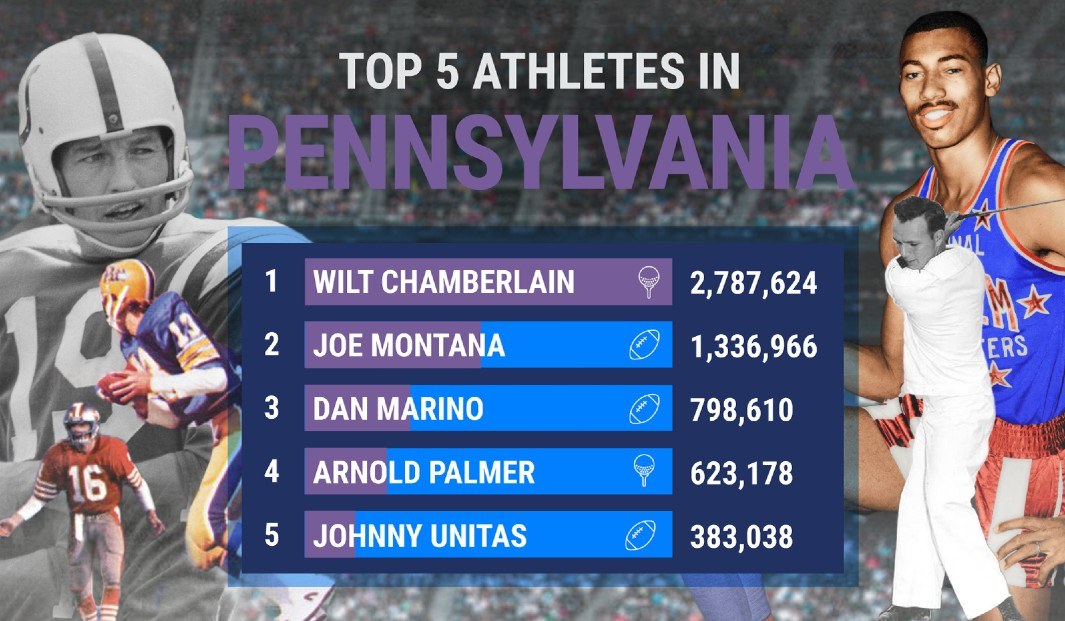 CHECK OUT: The Best Sportsbooks in Pennsylvania

Learn a Little More About Each Hometown Hero

Considered by most to be one of the greatest and most extraordinary basketballers of all time, Wilt Chamberlain is, to this date, the only NBA player to score 100 points in a single game, a feat he achieved for his hometown Philadelphia Warriors in 1962. He is an icon in his state, and beyond; all three franchises he played for retired Chamberlain’s jersey number.

Four-time Super Bowl champion and the first player to be named three-time Super Bowl MVP, Pennsylvania’s Joe Montana enjoyed 16 astonishing years at the highest level. Ranked fourth on the NFL’s list of the greatest ever players, Hall of Famer Montana has done more than enough to comfortably claim a place as one of his state’s top five sporting heroes.

Hailing from Pittsburgh, Dan Marino spent 17 seasons in the NFL. He never won a Super Bowl but his peers and sports fans alike consider Marino to be one of the greatest quarterbacks to ever grace the game, earning him a place among Pennsylvania sporting royalty.

Arnold “The King” Palmer, aptly named for his superstardom in the 50s, enjoyed a glittering golf career that spanned over six decades before he retired in 2006. Pennsylvania-born, Palmer is regarded as one of golf’s greatest ever players and ranks 5th on the all-time PGA Tour victory list, with 62 titles.

Regularly regarded among the greatest players of all time, Pittsburgh-born football player Johnny Unitas won three NFL championships and one Super Bowl across his 18-season career. Nicknamed “the Golden Arm” for his incredible passing range and popular media presence, Unitas was one of the early trailblazers for the modern quarterback.

To rank Pennsylvania’s top five hometown heroes, we first collected data around the state’s most successful and prodigious athletes from Bleacher Report. From here, we analyzed each athlete’s Wikipedia page to assess visits during a twelve-month period between March 2020-March 2021. The athlete with the most page views during this period is considered his state’s leading hometown hero, with the next four making up the top five.