Is The City of Brotherly Love Among the NBA's Most Rewarded Fans?

With the recent rejuvenation of Philadelphia Phillies fans in the City of Brotherly Love on their dream run to the World Series, as well as the Eagles dominant start to the NFL season across Pennsylvania sports betting, will Philadelphia 76ers fans have the same passion and trust the process for yet another season on the court?

PennStakes.com developed a ranking system of all 30 NBA teams to find what fanbase has been rewarded the most over the last 11 seasons.

Despite the presence of five-time All Star Joel Embiid, the Sixers have ground to make up among the NBA's most rewarded. 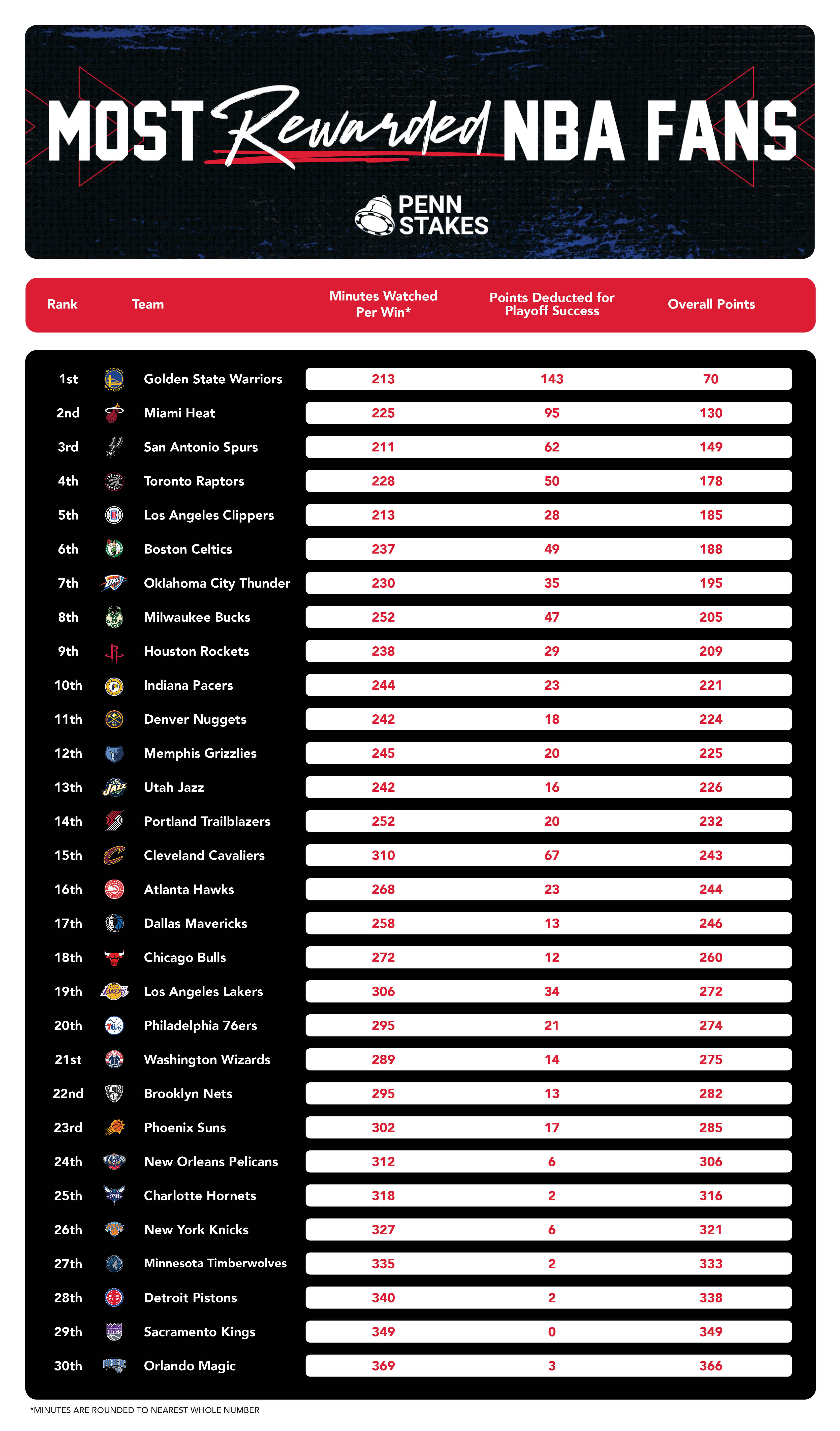 The first category “Minutes Spent Per Win” was determined by taking the amount of regular season games played by each team (from 2011-12 season to 2021-22 season) multiplied by the average length of an NBA televised game (2 hours, 13 minutes). Once we calculated that number, we divided it over the number of wins during those same seasons to arrive at the final amount. The final amount represents the number of minutes watched by fans per regular season win over the last 10 seasons.

Unlike their division rivals up the New Jersey Turnpike, the Sixers claimed the No. 20 spot in the Top 20 rankings with a total of 295 minutes, just behind the Los Anegles Lakers (306 minutes) and ahead of another Eastern Conference rival, the Washington Wizards (289 minutes).

The second category “Points Deducted for Playoff Success” was utilized to decipher the value of seeing playoff success during those 10 seasons gathered in the first category. The point values were 1 point per playoff berth, 3 points per playoff series win, 3 points per NBA Finals appearance, 15 extra points for NBA Championship win. After adding all the points together for every postseason from 2011-12 season to 2021-22 season, the points were deducted from Category 1 to arrive on the final points & rankings.

Philadelphia recorded 21 points for 274 overall points in the rankings.

Past Playoff Appearances - Will They Make It?

Since 2010-11, the Sixers (4-5) have made seven NBA Playoff appearances, reaching the Eastern Conference Semifinals five times (including four of the last five seasons and two of the last three under head coach Doc Rivers) but not advancing any further.

With perennial MVP candidate Embid, James Harden, Tyrese Maxey, Tobias Harris and with the addition of P.J. Tucker in the offseason, the Sixers are looking for their first Eastern Conference and NBA Finals berth since the 2000-01 season.

At DraftKings Sportsbook Pennsylvania, the Sixers over/under regular season win total is at 49.5, with the over at +110 and the under at -130.  Last season, they hit the 51-win mark, two more than two years ago at 49.

Judging by their lackluster start, the extended process could be on shaky ground.

Keep tabs on this site for the best PA sportsbook apps throughout the NBA season.

What Side Dish is Most Popular at Pennsylvania's Thanksgiving Tables?

Lou Monaco had been East Coast Scene columnist for Gaming Today in Las Vegas since June 2019, covering the East Coast sportsbook scene with emphasis on NJ and PA. He also currently is a part-time writer for the high school sports department for NJ Advanced Media (NJ.com) in Iselin, NJ. Lou has over 30 years sports experience with previous stints at ESPN SportsTicker, Daily Racing Form and Oddschecker.