Major league sports in the U.S. date back well over 100 years, back to when Major League Baseball as we know it started in 1901 with the advent of the American League (the National League was founded in 1876). The growth hasn’t stopped over the past century by any stretch, but we wanted to find out which leagues bring in the most supporters, and which have the fastest-growing market share in 2023, based on Google searches.

By reviewing how a respective market has grown on Google from 2004 to 2022, we at PennStakes were able to discover which leagues really illustrate market growth, and which have fallen short over the years.

Read on to discover how market share is changing in Pennsylvania for the different major league teams, and how differently Google search data changed from years ago to now.

While we typically stick to Pennsylvania online casinos here, stay close for research items such as this as well. 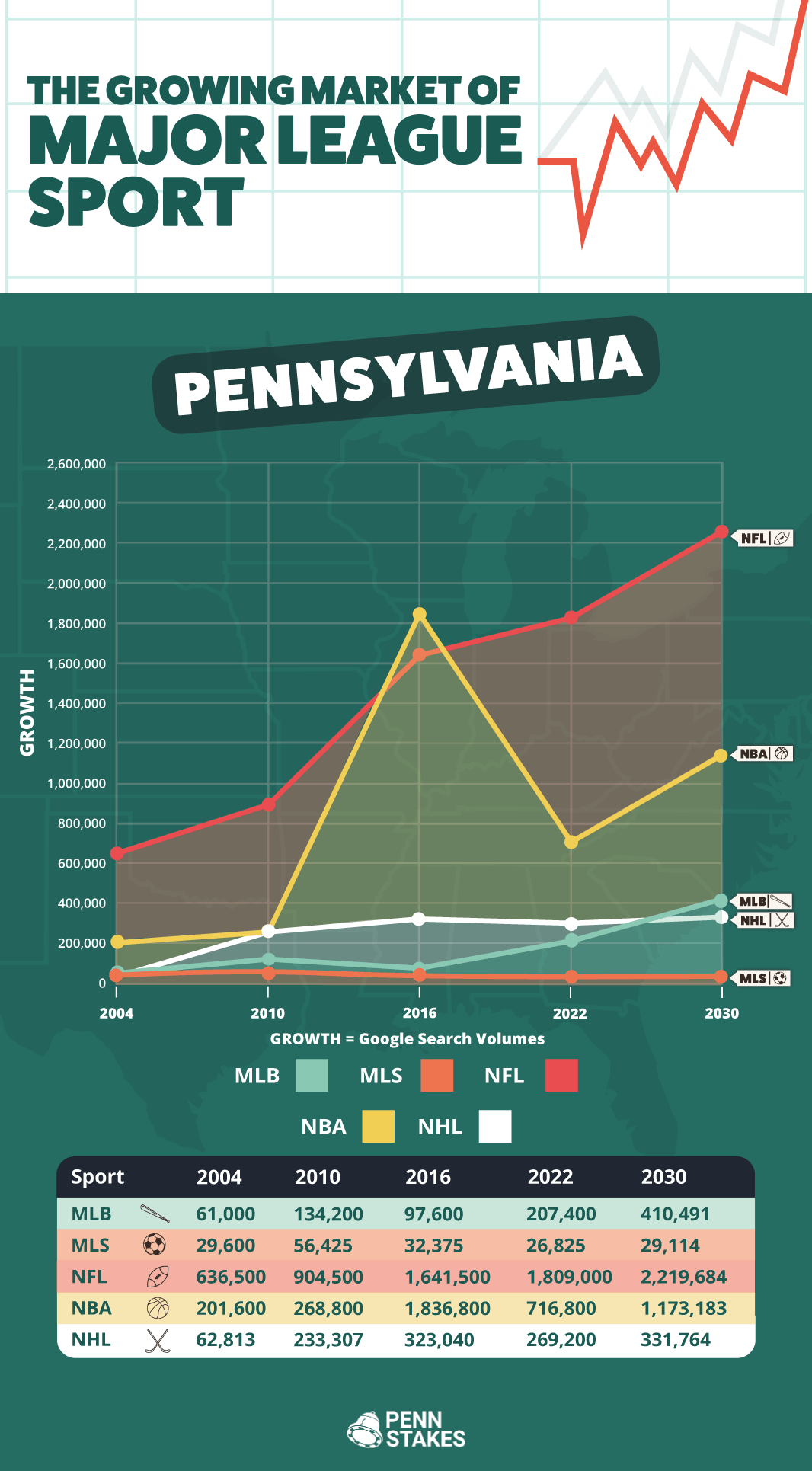 The results are in, and our data showed us that the NHL is the league with the largest market share growth, with a whopping 329% increase since 2004 up to 2022. This is super impressive, but isn’t hugely surprising, considering the Penguins’ great success across PA sports betting in that time frame.

This season, the team currently holds fourth-place in the Metropolitan division.

First Bet Offer Up To $1,000 on the Big Game - Bonus Code: PENNBONUS
PENNBONUS
Must be 21+ to participate. T&Cs apply.

Comparing Google search data and predictions between 2004 and 2030, we can reveal that the MLB is predicted to have the highest market growth in future years.

MLB's forecasted market share will increase by a startling 573% since 2004 - which is the highest of all Penn major league sports analyzed!

Since Penn is home to the 2022 NL Champion Phillies and the Pirates, it’s not surprising that baseball will continue to see market growth right up to 2030. The Phillies' postseason run across PA betting apps certainly didn't hurt.

Sixers Hold Down The Fort For NBA

When we look at market growth in Pennsylvania, the NBA has had the second-highest growth, a whopping 256% since 2004.

With the major Pennsylvania team, the 76ers, holding down the two seed in the Eastern Conference currently, the NBA can only expect to keep growing up to 2030.

And the odds are that there’s going to be around a 64% increase, which is the second highest we’ve recorded for this welcoming state. Meanwhile, the Joel Embiid-led 76ers currently have +1600 NBA title odds at FanDuel Sportsbook PA.

Fewer Folks Searching for MLS, But That Could Change

From our research, it seems MLS fell behind in terms of market growth, holding the smallest search data of all when compared to other major sports leagues. It seems fewer and fewer people have been searching for findings on the MLS over the last 18 years, from 2004-2022.

Having just one Philly-based team playing a part in this Google search data is likely the cause of these results, with the Philadelphia Union being the only major player in the league.

This dataset from PennStakes.com compares the number of fans for each major sporting league (NFL, NBA, NHL, MLS, MLB) in the state of Pennsylvania and forecasts their projected growth up to 2030 using search volume and Google trend data.

As search volume data is only accessible back to December 2018, the estimated search volume from January 2004 to November 2018 has to be calculated. Using the trend values as proxies, the equivalent search volume of the largest trend index value accessible could be found as far back as 2004.

If multiple months had the same largest index value, the one with the largest search volume would be used. This allowed for the calculation of the index estimated search volume (IESV) metric.

From there, the “=forecast.ets” function was used to forecast the IESV. This takes into account seasonality, which is necessary, as the sports will have peaks and dips at different times of the year, meaning a linear forecast cannot be used.

This was used to forecast the data to December 2030, using the previously estimated search volume from January 2004 to November 2022.

Get a $500 Risk Free Bet on the Big Game - Promo Code: PENNBONUS
PENNBONUS
Must be 21+ to participate. T&Cs apply.