Pennsylvania is one of America’s greatest sporting states. Home to the Eagles, Steelers, Phillies, Penguins and many more, Pennsylvania has a team in every major sporting league... and let’s not forget the Philadelphia Union in MLS.

With so many amazing teams to support, sports fans have plenty of Pennsylvania sports betting choices, but which franchises are actually the most popular online?

To determine the most popular teams in Pennsylvania, we analyzed the number of Google searches each recorded over the last 12 months. We then calculated the average monthly volume and ranked the top franchises. Read on to see where your team places!

Risk Free Bet Up To $1,000 - Bonus Code: PENNBONUS
PENNBONUS
Terms apply for all bonuses. Must be 21+ to participate. 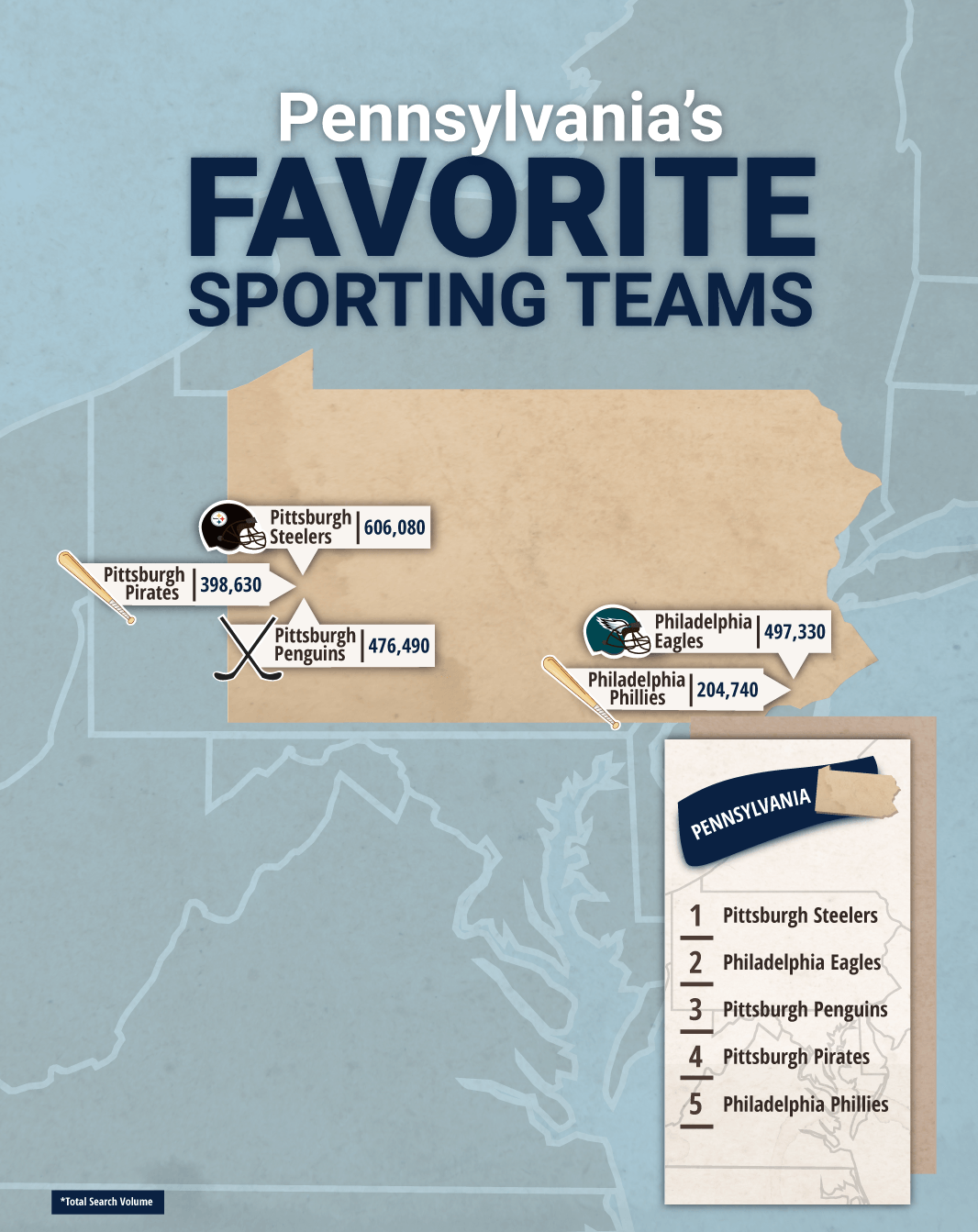 Leading the way as Pennsylvania’s most popular sports team, we have the NFL’s most successful team, the Pittsburgh Steelers, with more than 606,000 Google searches each month.

Bet $5 On Any Sport, Get $150 If You Win
Activate Code
Terms apply for all bonuses. Must be 21+ to participate.

In second, with almost 500,000 Google searches each month, we have Pennsylvania’s next most popular NFL team in the Philadelphia Eagles, who have gotten off to a strong start to the season with wins in their opening four games.

$250 Risk-Free Bet
Activate Code
Terms apply for all bonuses. Must be 21+ to participate.

Pennsylvania’s third most popular sports team is the NHL’s Pittsburgh Penguins, with 476,000 Google searches per month, including 119,300 in Pittsburgh (2nd) — but only 7,500 in Philadelphia (9th).

With the NHL season just around the corner, fans will be hoping the Penguins can add to their five Stanley Cup titles — even if they are longshots this season (BetMGM Sportsbook PA has the Penguins +1800 to win the Stanley Cup).

2nd Chance Bet Up To $500 - Promo Code: PENNRIV
PENNRIV
Terms apply for all bonuses. Must be 21+ to participate.

The Pittsburgh Pirates are Pennsylvania’s most popular baseball team, with nearly 400,000 Google searches for the franchise each month — almost twice as many as the Philadelphia Phillies (though the Phillies qualified for the playoffs this season).

Speaking of the Phillies, the franchise ranks fifth among the most popular sports teams in Pennsylvania with over 200,000 Google searches each month, including 45,500 in Philadelphia (5th).

Despite making the playoffs for the first time since 2011, the Phillies are World Series longshots — FanDuel Sportsbook PA has Philadelphia tied for ninth in championship odds at +3000.

Pennsylvania’s Most Popular Teams by City


Watching sports is one of the most popular pastimes in Pennsylvania, so it should come as no surprise to see such staggering search volumes for each of the state’s most popular teams. No matter your favorite state team, come to PennStakes.com for all the best PA sportsbook promo codes.

What Side Dish is Most Popular at Pennsylvania's Thanksgiving Tables?