Most Dedicated NHL Fans: Where Do Flyers, Penguins Rank? 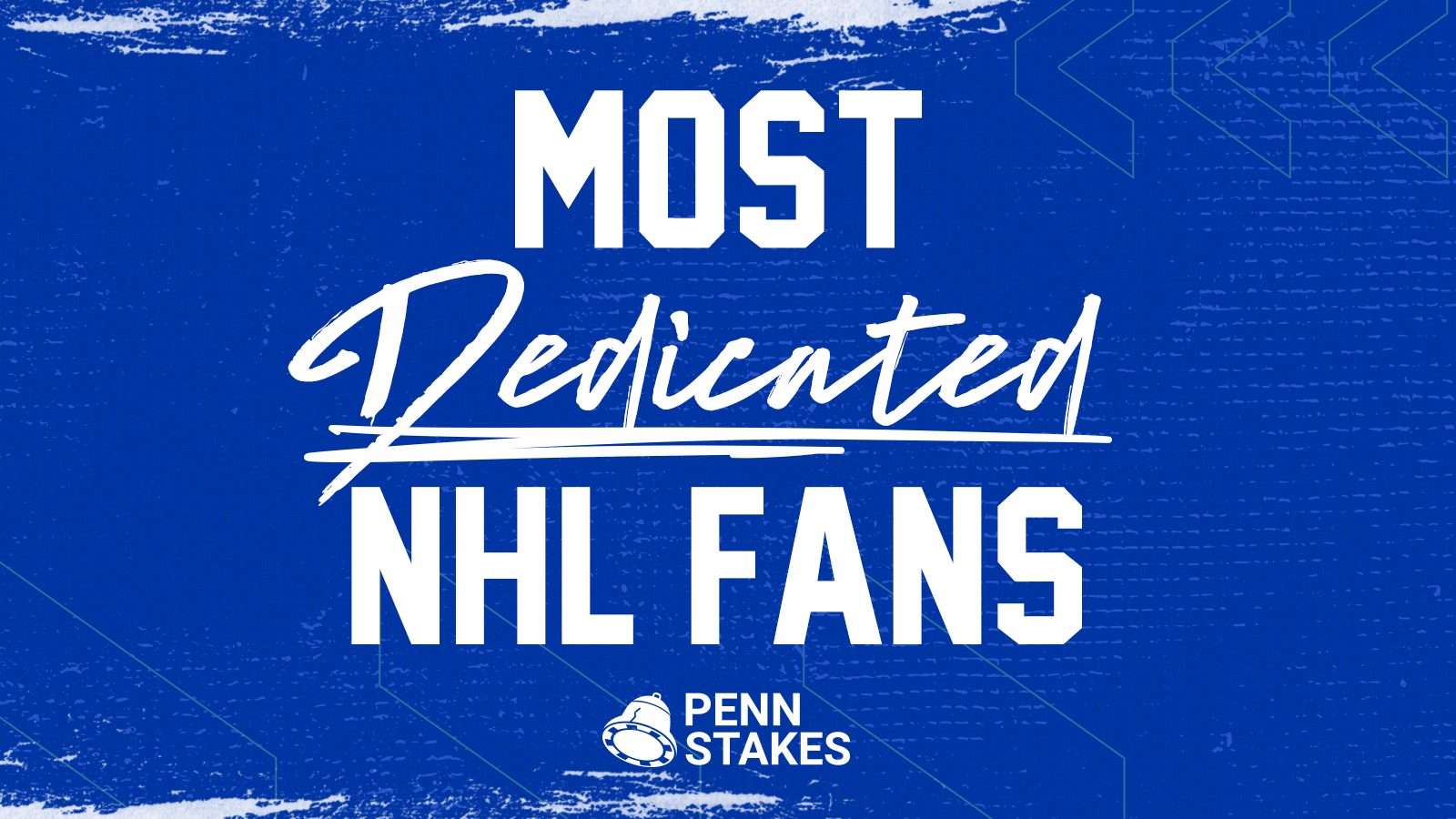 The National Hockey League regular season begins in earnest this week with both the Philadelphia Flyers and Pittsburgh Penguins hosting season openers on Thursday.

It’s another outlet for people to consider in Pennsylvania sports betting.

PennStakes.com developed a matrix system to rank 31 of the 32 NHL teams based on the dedication of their fans. (The Seattle Kraken was not considered, due to just one year of existence.)

$1,000 No Sweat First Bet
Activate Code
Terms apply for all bonuses. Must be 21+ to participate.

Here is the methodology we used.

The first category — Game Day Commitment — was a weighted grouping of “capacity % by wins” since the 2010 season (2019 & 2020 eliminated due to COVID) and the amount of ticket searches in the state of that team. We utilized NHL.com for attendance numbers and Google Trends to find the amount of ticket searches. Once determined, the team with the best Game Day Commitment was given 31 points, down to the worst with one point.

The second category — Fan Engagement — was a weighted grouping of social following growth over the past five years and the engagement rates of all of the NHL’s team social media accounts. We utilized SocialBlade.com to find the statistics for the category, which utilized the Facebook, Twitter, Instagram, Tiktok & YouTube of each team. Similar to the previous category, the best Fan Engagement was given 31 points down to one point. 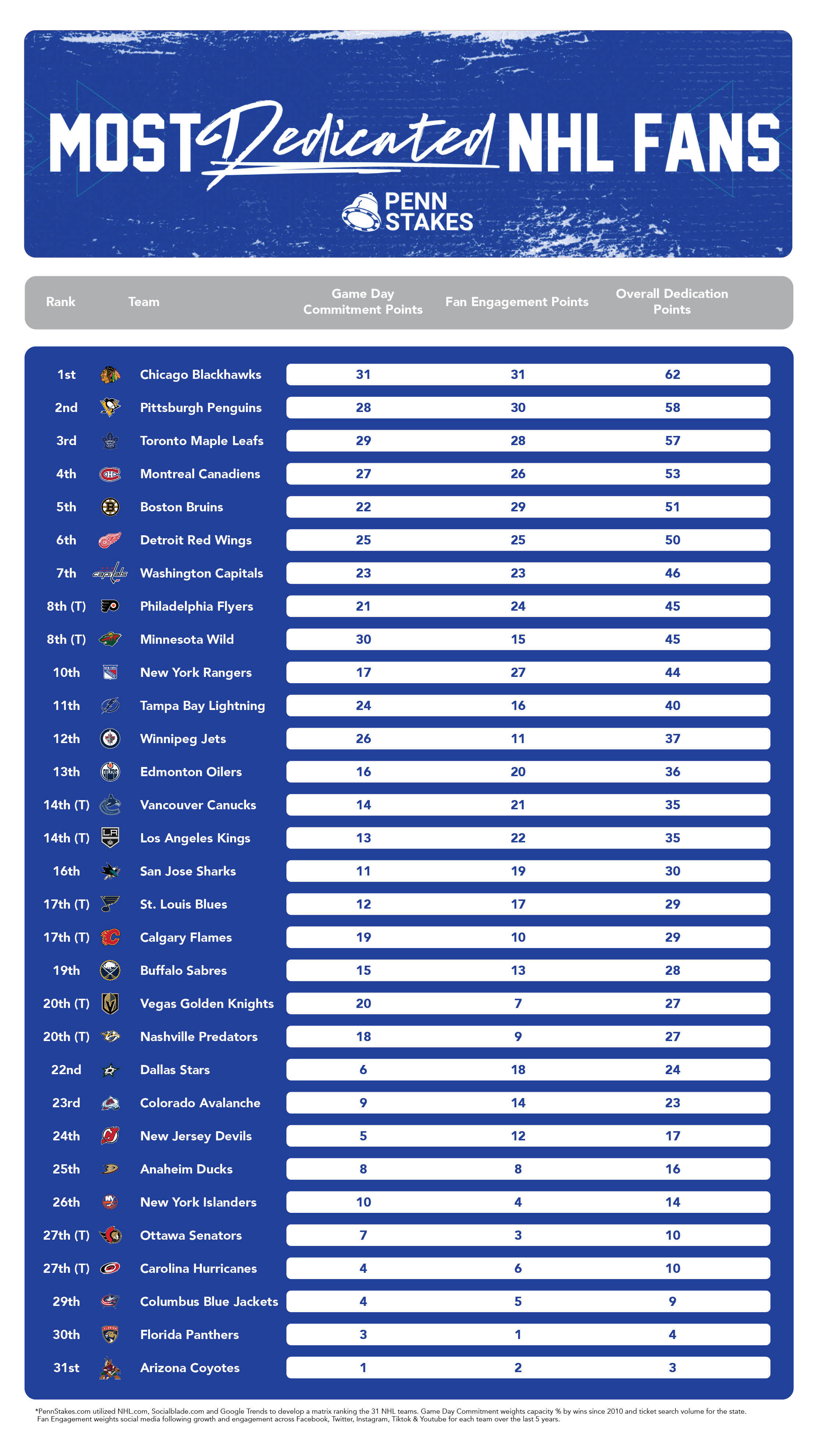 Risk Free Bet Up To $1,000 - Bonus Code: PENNBONUS
PENNBONUS
Terms apply for all bonuses. Must be 21+ to participate.

The way the Phillies (MLB) and Eagles (NFL) seasons are playing out, who knows what the Flyers season will look like under new head coach John Tortorella? One thing anyone sharp with Pennsylvania sports betting apps knows for certain: The rabid fanbase (tied with the Minnesota Wild for eighth in the Most Dedicated NHL Fans list) is yearning for some progress and success as Philadelphia hosts one of its division rivals, the New Jersey Devils, Thursday at 7 p.m.

Last season, the Flyers finished with a disappointing and uninspired 25-46-11 record (dead last in the eight-team Metropolitan Division). Tortorella will bring enthusiasm, a new attitude and direction.

One of Tortorella’s main goals is to improve a defense that allowed 3.59 goals per game (sixth-most in the league) and 34 shots on goal per game (fourth-most).

The Presidents’ Trophy is awarded to the team that finishes the regular season with the best overall record.

Get a $500 Risk Free Bet - Promo Code: PENNBONUS
PENNBONUS
Terms apply for all bonuses. Must be 21+ to participate.

The fans of the Penguins almost took the title in our rankings for Most Dedicated Fan. Only the Chicago Blackhawks scored higher.

The Penguins open their regular season Thursday by hosting the Arizona Coyotes at 7 p.m.

The Penguins are listed as one of the top 10 favorites to hoist the Stanley Cup (tied with the New York Rangers for 10th).

With the addition of Jeff Petry and Jan Rutta on the blue line, the Penguins added not only offense, but strengthened a defense that allowed the fifth-fewest goals in the league last season.

In Pennsylvania NHL betting, here are the DraftKings odds:

Keep close to PennStakes.com for stories about teams in the state as well as for best PA sportsbook promo codes.

Lou Monaco had been East Coast Scene columnist for Gaming Today in Las Vegas since June 2019, covering the East Coast sportsbook scene with emphasis on NJ and PA. He also currently is a part-time writer for the high school sports department for NJ Advanced Media (NJ.com) in Iselin, NJ. Lou has over 30 years sports experience with previous stints at ESPN SportsTicker, Daily Racing Form and Oddschecker.